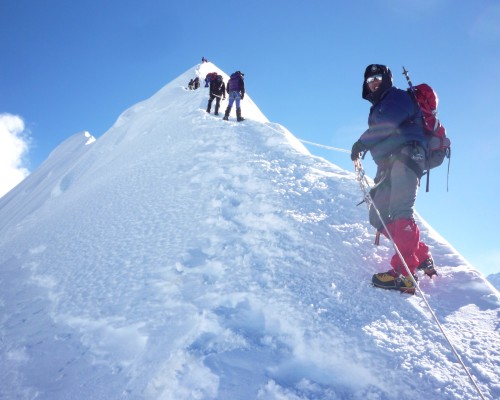 Boudhanath Stupa: One of the oldest and the biggest Buddhist monuments ever built in Nepal, Furthermore it is one of the holiest Buddhist sites in Kathmandu. Boudhanath is an imposing structure standing some 36 meters. The Stupa stands on the massive three level mandala style Platforms surrounded by colorful private family houses. Listed in the UNESCO World Heritage list this site is considered very much like Mecca for the Buddhist. O/N hotel

Swayambhunath: The most ancient and enigmatic of all the Valley's holy shrines lies 2 km west of Kathmandu city, across the Vishnumati River. The golden spire of Swayambhunath stupa crowns a wooded hillock and offers a commanding view of Kathmandu city. On clear days, one can even view a line of Himalayan peaks. The view is splendid at dusk as city lights flicker one by one and even better when a full moon hangs in the sky.

Kathmandu Durbar Square: The Square is the complex of palaces, courtyards and temples that are built between the 12th and the 18th centuries by the ancient Malla Kings of Nepal. It is the social, religious and urban focal point of the city. Taleju Temple, Kal Bhairab (God of Destruction), Nautalle Durbar, Coronation Nasal Chowk, the Gaddi Baithak, the statue of King Pratap Malla, the Big Bell, Big Drum and the Jagnnath Temple are some of the interesting things to see in this Square.

Today, after breakfast, we will drive to Chitwan, which is 150 kilometers from Kathmandu and a 5 hour's drive into the mountains. All the way we descend down along the winding road on the banks of the Trishuli River. Chitwan has a particularly rich flora and fauna. Nepal’s 1st national park, the Chitwan National Park together with the adjacent Parsa Wildlife Reserve supports spices diversity much higher than any other on the Indian subcontinent. Rare species include Bengal Tiger, Gharial and the world’s second largest population of Asian Rhinoceros, but also Leopards, Mugger Crocodile, Indian rock python and several species of deer.

After check in into the hotel and getting refreshed you will be briefed about full nature programs by our guide. Then we head on for activities. There will be a guided village walk and a walk on the banks of the Rapti River to watch the charming sunset views in the sub-tropical jungle. In the evening, dinner with cultural program by ethnic tribal people with their stick dance and tribal drums, popularly known as Tharu Cultural Program

After having breakfast, today, we drive to Pokhara which is about 140 kilometers from Chitwan and a 5-6 hour's drive. Pokhara, also nicknamed as the Lake City, is not only Nepal's but one of the most beautiful places on earth. The town offers magnificent views of Dhaulagiri, Manaslu, Machhapuchhare, five peaks of Annapurna and others. Pokhara owns numerous lakes, known as 'Tal' in Nepali, offer fishing, boating and swimming. Pokhara is also the gateway for trekking in the Annapurna Region. Reaching Pokhara, we visit Davis Fall and Gupteshwar Cave (also called Shiva Gufa). We also make a sightseeing trip to some of Pokhara's marketplaces, old bazaars, and landmarks. In the evening, explore the surrounding lakeside areas. O/N Hotel

Early morning we will drive to Sarangkot and have sunrise view. From Sarangkot, you can see a panoramic sweep of Himalayan peaks, from Dhaulagiri (8167m) in the west to the perfect pyramid that is Machhapuchhare (6997m) and the rounded peak of Annapurna II (7937m) in the east. Most people come here at dawn or dusk, when the sun picks out the peaks in brilliant colors.

Nagarkot, situated 34 km north-east of Kathmandu, Nagarkot is one of the most beautiful sites in Nepal. With an altitude of 2,715 meters, this is an ideal place to watch sunrise over Mt. Everest. There are magnificent sites of other mountain peaks too including Mt. Everest.
At evening we will go to tower for sunset view. O/N hotel

Early morning we will go for sunrise view and after that we will go to hotel, have breakfast and then we will drive back to Kathmandu. On the way, we will stop for sightseeing of Bhaktapur Durbar Square and surrounding places and free time. O/N hotel

Bhaktapur Durbar Square: The main square of the city contains innumerable temples and other architectural showpieces like the Lion Gate, the statue of King Bhupatindra Malla, the Picture Gallery, the Batsala temple, etc. A magnificent statue of King Bhupatindra Malla in the act of worship is placed on a column facing the palace. It was listed in UNESCO World Heritage Monument List in 1979.

After having breakfast we will go for sightseeing tour of Patan and its surrounding area i.e. Khokana and Bungmati. Remaining time you are free and also can enjoy shopping at Thamel. After dinner you will be transferred to airport before three hours of departure time.

Patan: Patan, also nicknamed as "The City of Fine Arts" is full of ancient places, temples and shrines, noted for their exquisite carvings. The Patan Durbar Square is also a UNESCO listed World Heritage Site. Patan Square and its surroundings is good specimen of ancient Newari architecture. There are three main courtyards in the palace: Mul Chowk, Sundari Chowk and Keshav Narayan Chowk. Mul Chowk, the oldest one, is at the center of Patan square.

Kindly Note: The above rate is just for your reference, the final program should be in accordance with the final tour notice. Price might change as per availability and confirmation.